Inter Faith Week drew to a close yesterday, Sunday 19 November. Many key public figures showed their support, including Prime Minister Theresa May; Lord Bourne of Aberystwyth, Minister for Faith at the Department for Communities and Local Government; other MPs; Mayor of London Sadiq Khan; and mayors and councillors across the country.

The Co-Chairs of the Inter Faith Network for the UK, which leads on the Week, the Rt Revd Richard Atkinson and Jatinder Singh Birdi say:

“Inter Faith Week 2017 has seen an incredible array of activities taking place, involving many thousands of people of different backgrounds. These have contributed to developing even stronger inter faith relations in local communities and in our shared society.”

“Inter Faith Week 2017 was an inspiring effort across all neighbourhoods and faiths across the United Kingdom, in building understanding, tolerance and a sense of community. These sentiments are so important as we build a country where everyone has the chance to succeed and where no one suffers discrimination because of their background, ethnicity, religion or belief.”

Strong support has been offered from within national faith community bodies with messages from leading figures such as Chief Rabbi Ephraim Mirvis and from many faith and denominational bodies. Faith communities have contributed in ever-increasing numbers. They have opened their doors and welcomed others in, discussed commonalities as well as challenging and difficult issues, celebrated with their neighbours, taken part in joint social action projects, and been active in civil society in existing and new ways. Inter faith organisations have also played a vital role in the Week, highlighting and providing a focus for the important work that they do year-round.

More activities have taken place than in any previous year since Inter Faith Week began in 2009.  The hundreds of organisations that have taken part have included: faith communities and inter faith bodies; non-religious belief bodies; local authorities; schools, universities and FE colleges; businesses; youth organisations;  sports organisations; police and other emergency services; the Armed Services; hospitals and hospices; Government departments, and many more.

The geographical spread has been huge: Bangor, Belfast, Bristol, Carlisle, Durham, Exeter, Fermanagh and Omagh, Great Yarmouth, Leeds, London, Manchester, Medway, Oxford, Penryn, Northampton, Newcastle, Waltham Forest and Wolverhampton, are just a few of the places.  Week-long programmes have taken place in a number of cities and towns such as Birmingham, Bolton, Kendal, Leicester, Preston, and York.  The Week’s events can be seen at www.interfaithweek.org/map.

The Week is timed to begin on Remembrance Sunday, remembering the service of soldiers and civilians of many faiths and beliefs. That was reflected in participation in civic commemorations and a number of moving events. Across the Week there have been: sporting events; school activities; social action projects such as meals for the homeless and tree plantings; dialogues; cultural events; open door days held by faith groups around the country; faith trails; talks; women’s events; events for young people; events bringing religious and non-religious people together; and many more.

The Week has seen many new partnerships and launches of a number of new projects as well as signalling the start of a tour of faith communities’ places of worship by Lord Bourne of Aberystwyth, Minister for Faith at the Department for Communities and Local Government.

The Inter Faith Network for the UK held a joint symposium with Sporting Equals UK:  ‘The Power of Sport to Build Good Inter Faith Relations’.

The Near Neighbours Programme of the Church Urban Fund and the Inter Faith Youth Trust have supported a number of events during the Week.

The impact of the Week has also spread further than ever before on social media, with many organisers, participants and supporters tweeting about the Week. Tweets about the Week have so far had a potential reach of 12.6 million Twitter users with over 40 million impressions.

This year Scottish Interfaith Week, which has taken place since 2004, took place on the same dates as Inter Faith Week in England, Wales and Northern Ireland. Its theme for 2017 was ‘Creativity and the Arts’; it was also a very high impact week. 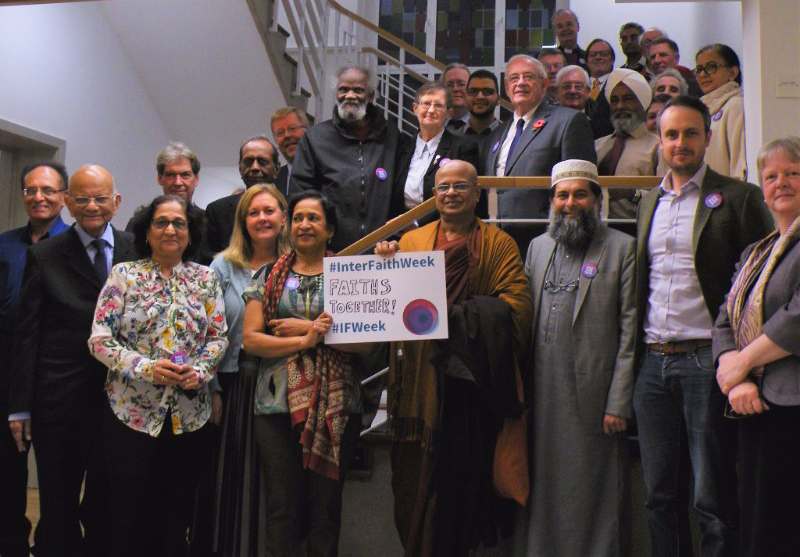 Many tweets linked to the Week can be found by searching for #InterFaithWeek and following the @IFWeek account.