The Inter Faith Network for the UK (IFN) was founded in 1987, following two years of consultation, to advance public knowledge and mutual understanding of the teachings, traditions and practices of the different faith communities in Britain including an awareness both of their distinctive features and their common ground and to promote good relations between people of different faiths in this country

The following is an excerpt from the founding resolution:

"We meet today as children of many traditions, inheritors of shared wisdom and of tragic misunderstandings. We recognise our shared humanity and we respect each other's integrity in our differences. With the agreed purpose and hope of promoting greater understanding between the members of the different faith communities to which we belong and of encouraging the growth of our relationships of respect and trust and mutual enrichment in our life together, we hereby jointly resolve: The Inter Faith Network for the United Kingdom should now be established..." 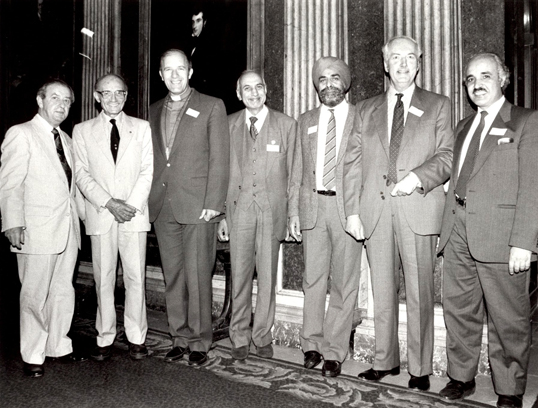 Press photo taken at the launch event of the Inter Faith Network in 1987.

In bringing together national faith communities and inter faith bodies on an organisational basis, IFN was the first such national inter faith structure in the world.

Through its meetings and its publications IFN has provided – and continues to provide – opportunities for sharing of good practice, discussion of challenges and reflection on ways forward in the development and strengthening of a society rooted in shared values.

Today, this work is no less important than it was at the time of IFN's founding. Over recent years, there has been a major growth of interest in inter faith issues and greater recognition of the importance of religion in the life of many of the UK's citizens. At the same time, much work remains to be done to counteract prejudice and suspicion, to encourage understanding and to foster practical cooperation.

For further information about the early history of IFN see 20 Years: Milestones on the Journey Together Towards Greater Inter Faith Understanding and Cooperation , a publication produced to mark the 20th Anniversary of the Network in 2007.

From November 2012 until 2013 a major Strategic Review took place and the current Strategic Plan reflects the report and recommendations from this, including response of member bodies.