Universities are diverse places, with students and staff from a wide range of different faiths and non-religious backgrounds. They also bring people together not just from all over the UK, but from all over the world. This page includes information about the types of inter faith activity taking place in universities, and how to get involved.

There are a wide variety of different types of initiative taking place within universities to encourage encounter, learning and good relations between people of different faiths and beliefs. These include initiatives led by Students' Unions; student-led religion and belief societies or collaborations between several of these; initiatives led by the chaplaincy; activities led by other staff, such as Services for Students teams; and activities facilitated by outside organisations. 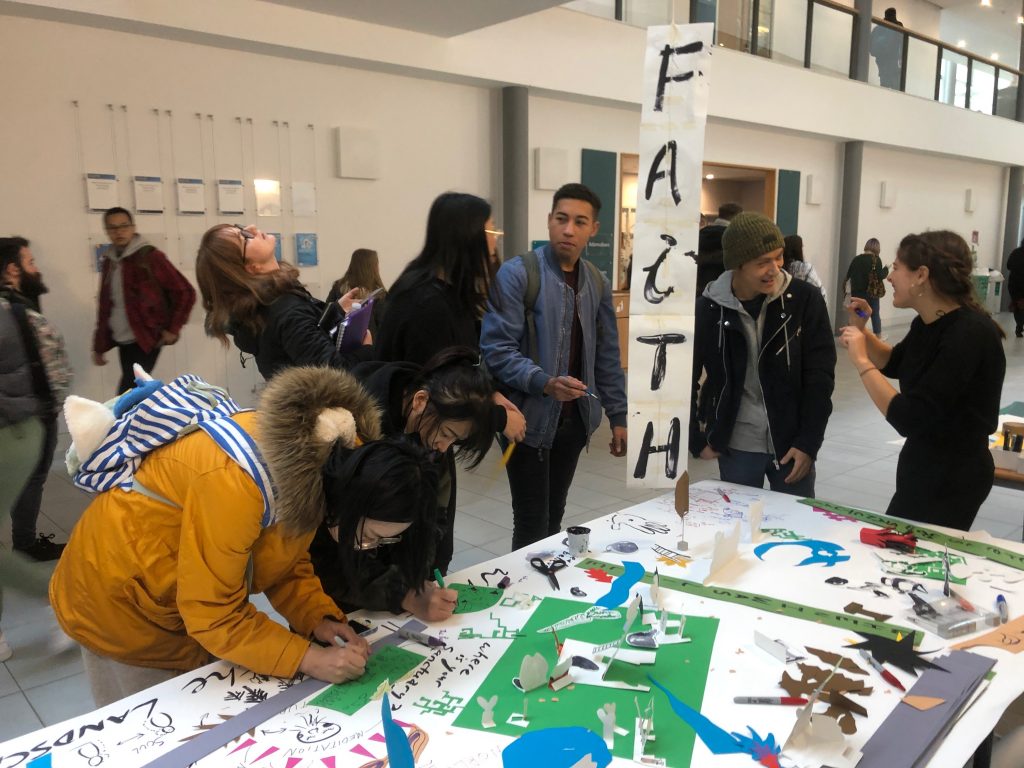 If you are a student at university and you are interested in getting involved with inter faith activity, contacting your chaplaincy or faith centre can be a great place to start.

All universities across the UK have a chaplaincy or faith centre and chaplains or their equivalent.

The chaplaincy often provides a focal point for aspects of religious life on campus. University chaplains play an important role on campus, and are responsible for providing pastoral and spiritual care for staff and students of all faiths and of non-religious beliefs. While the majority of chaplaincies would have historically been just Christian, most now operate on a multi-faith basis. Often there is a lead chaplain who is a minister within a particular religion, and a team of chaplains (whether employed or volunteer) from other traditions. Many chaplaincies are also able to offer information to students about student-friendly places of worship linked to a range of religious traditions as well as non-religious belief groups. In addition to providing information about places of worship in the local area, some chaplaincies also have links with inter faith group and projects locally.

Each year during Inter Faith Week and Scottish Interfaith Week, many chaplaincies run activities and/ or support and encourage involvement in activities being run by others. During Inter Faith Week 2020, some universities across the UK took IFN's Inter Faith Buddies scheme, creating opportunities for students to make friends online with students from different backgrounds in an informal and friendly way. Examples of universities that have taken up the initiative are Imperial College London and the University of Derby.

Students' Unions play a vital role for students both on-campus and off-campus, and are often at the forefront of student life. They are led by students, and are responsible for supporting student welfare, representing student interests at an institutional level, and hosting social and sporting events. Most Students' Unions also support student-led societies such as faith and belief societies.

Most Students' Unions in the UK are affiliated with the National Union of Students (NUS), which is a confederation of Students' Unions that promotes and defends students' rights and interests at national and UK level. NUS also organises campaigns and targeted action on issues such as discrimination. NUS has recognised the need for positive inter faith relations on campus, and has supported this in various ways over time, including through production of an Inter Faith Toolkit for Students' Unions with information on religious diversity, inter faith dialogue and social action and how to organise inter faith activities. NUS also encourages participation in Inter Faith Week/ Scottish Interfaith Week.

Most Students' Unions in the UK have many affiliated societies for students to choose from, including sports clubs, faith-based and non-religious societies, those linked to nationality or culture, as well as those linked to interests such as political parties, languages, and environmental action. A number of universities also have multiple faith-based societies that have good relationships and collaborate on occasional inter faith events. Some universities have dedicated inter faith societies, such as the University of Leeds which has a Union Interfaith society, and the University of Saint Andrews which has a Co-Existence Initiative society for students of all philosophies and faiths.

In addition to affiliating with their Students' Union, many student-led faith-based and non-religious belief societies also affiliate with or are supported by national student faith or belief bodies. A number of these also produce resources to help students get involved with/ organise inter faith activities.

A small number of inter faith organisations run regular programmes at universities. However, even where the bodies below are not currently running programmes at your university, you may wish to reach out to them for information, and their websites contain resources that may be helpful.

Due to the COVID-19 pandemic, Universities have been faced with the challenge of rapidly adapting to the new mainly virtual world of interaction this has brought. In some cases, people are working remotely; in other cases, institutions are open but person-to-person contact is limited in line with regulations.

Many university chaplaincies have also moved their activity online, with pastoral care being conducted virtually, and events taking place on social media platforms or via video conferencing. In some cases, the pandemic has allowed for engagement between a broader number of students through use of easily accessible platforms; however in other cases engagement has been more limited. Many university chaplaincies and Students' Unions took part in Inter Faith Week 2020 virtually.

If you are a student, chaplain or member of staff that would like to get involved in organising inter faith activity at an HE institution, you can access relevant resources and guidance through the 'Resources' section, and by contacting IFN by email.