Local inter faith organisations play a crucial role in fostering understanding and good relationships between different faith groups in the UK. Many take part in commemorations or projects linked to Holocaust Memorial Day and Remembering Srebrenica.

Local inter faith organisations play a crucial role in fostering understanding and good relationships between different faith groups in the UK. Many take part in commemorations or projects linked to such Days and Weeks as Holocaust Memorial Day and Remembering Srebrenica.

Marking such days is an opportunity for people of different faiths and of no faith to come together both to remember the victims of these terrible events and also to stand together against prejudice and intolerance to commit again to helping to  create a safer, better future.

A number of resources are available for local inter faith groups to commemorate these important dates.

Holocaust Memorial Day (HMD) takes place every year on 27 January. It was established as an international day of commemoration in 2000 when 46 governments signed the Stockholm Declaration.  It has taken place in the UK since 2001, with Commemorative events taking place in England, Scotland, Northern Ireland and Wales, and local activities taking place all across the UK on or around 27 January.  2020 marks 75 years since the liberation of Auschwitz-Birkenau. It also marks the 25th anniversary of the Genocide in Bosnia.

The Day is to remember the six million Jews murdered during the Holocaust, alongside the millions of people killed under Nazi Persecution and in subsequent genocides in Cambodia, Rwanda, Bosnia and Darfur. Further information is available here.

In the UK, The Holocaust Memorial Day Trust (HMDT) promotes HMD and supports local groups to commemorate it.

Each year Bolton Interfaith Council hosts a Holocaust Memorial event, bringing together schools, community organisations and civic leaders to remember the victims of the Holocaust and acts of genocide that have happened since in Cambodia, Rwanda, Bosnia and Darfur. 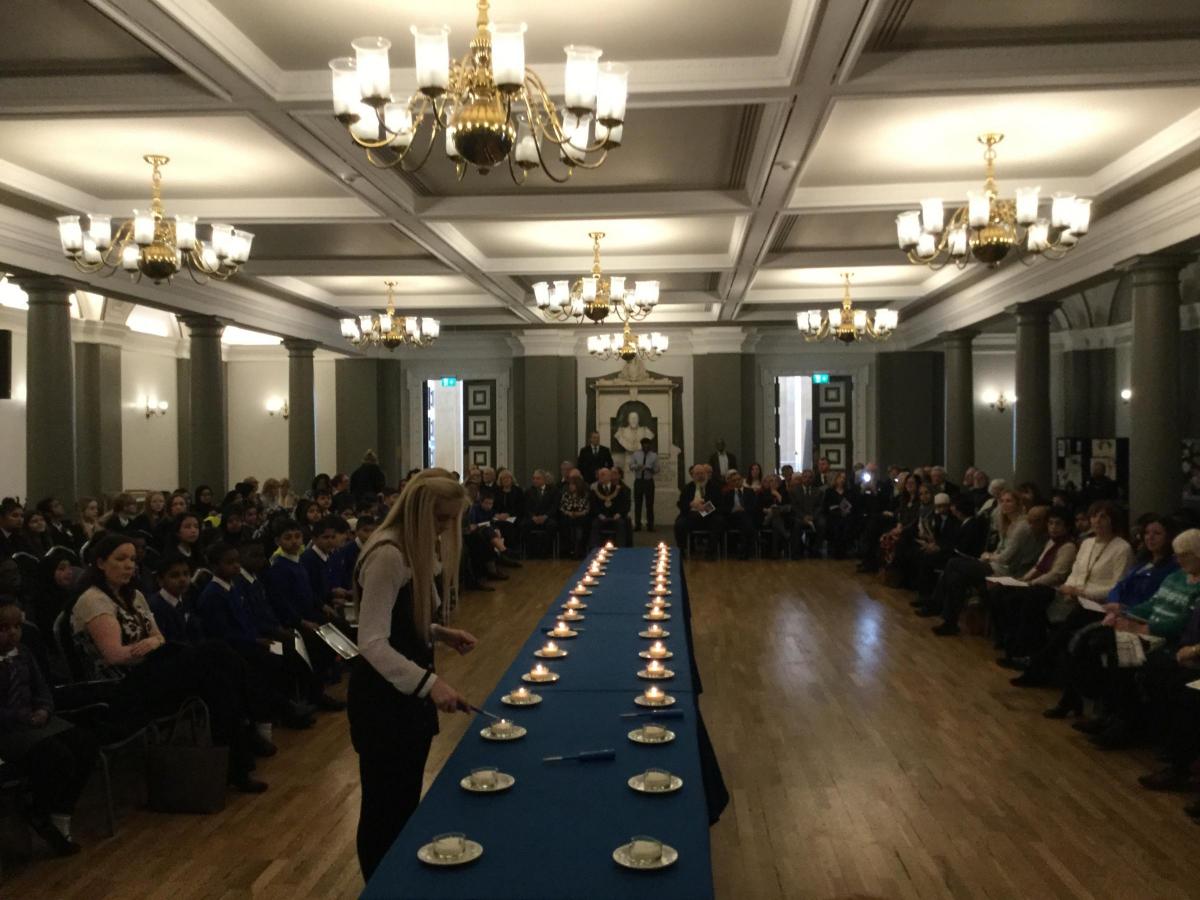 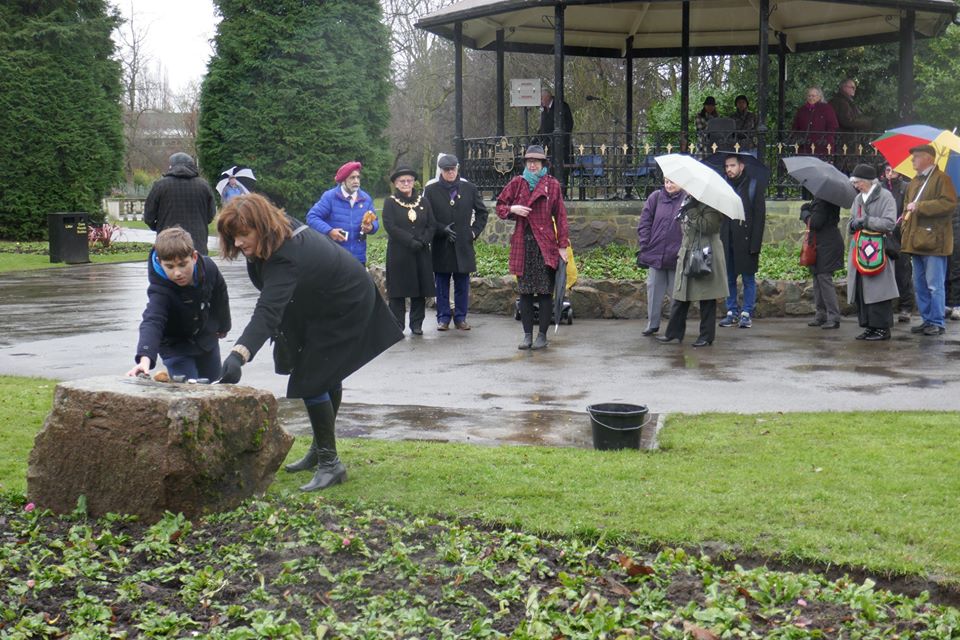 Llampunsaint in Carmarthenshire, Wales, has been holding Holocaust Memorial Day commemorations since 2018. These events involve people from across a number of Christian denominations, members of the local mosque and those with Jewish heritage along with those of no faith. 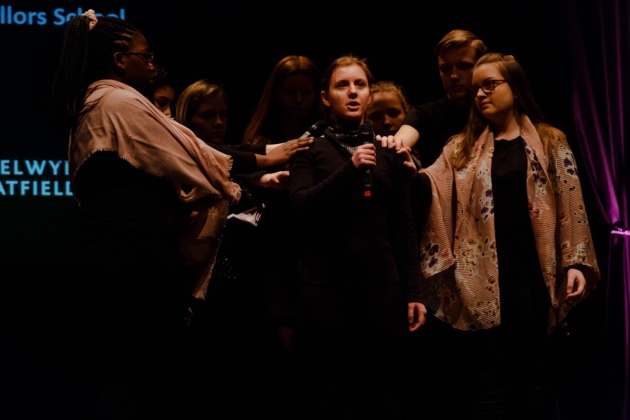 In 2019 Welwyn Hatfield Interfaith Group worked in partnership with local schools to give a short sries of performances around the theme 'Torn from Home'. These performances included poems and short stories about Nazi persecution, original poems about the Rwandan Genocide and a drama piece about the events in Darfur.

If you are organising an event remember to register it here.

Srebrenica Memorial Day takes place every year on 11 July and is the day to remember the 8,000 Muslim men, and boys over 12 years old, who were murdered in Srebrenica, Bosnia. Since 2014 Srebrenica Memorial Week has taken place annually across the UK in July. The genocide at Srebrenica is the largest incidence of mass-murder in Europe since World War Two. 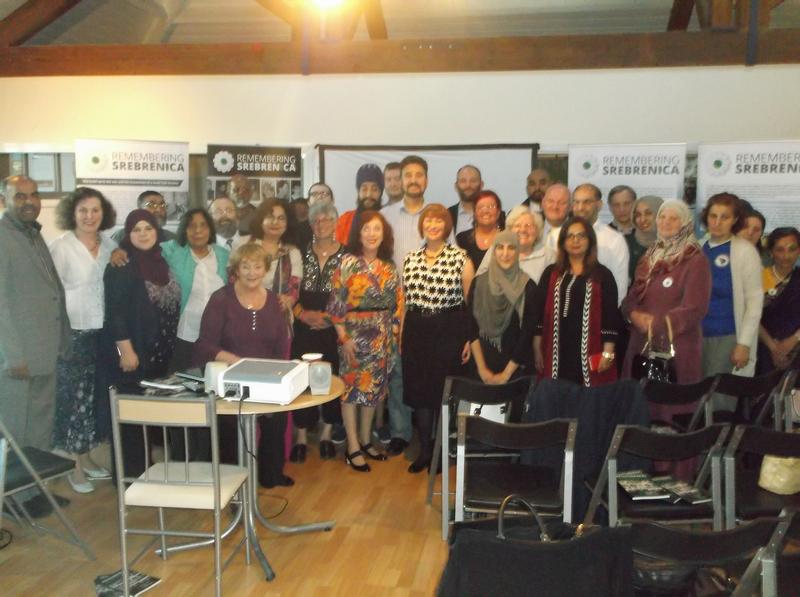 In 2016 the Muslim-Jewish Forum of Greater Manchester and Faith Network 4 Manchester organised a fundraiser for Remembering Srebrenica at the Manchester Multi-Faith Centre, raising over £200 for the charity.

The following year, in 2017, the two organisations collaborated again to organise a Srebrenica memorial event at the Manchester Multi-Faith Centre. The event was attended by over 40 people of different faiths and none, and included speakers such as Julie Ward MEP, Cllr Rabnawaz Akbar and Bosnian refugee Dudia Zilic.

Hull and East Riding Interfaith worked in partnership with Remembering Srebrenica in 2019 to hold a discussion on the misuse of religion in ethnic conflict, led by Dr Catherine Baker from the University of Hull. This meeting formed part of the annual commemorations in Hull for the men and boys who were killed during the Srebrenica genocide.

A number of resources are available on the Holocaust Memorial Day Trust and Remembering Srebrenica websites for those who have decided that they would like to mark these annual memorial days.

A film screening event can be a powerful way to raise awareness of the impact of hatred and intolerance. Both the Holocaust Memorial Day Trust and Remembering Srebrenica websites highlight a number of films and life stories that can be featured in inter faith meetings to commemorate memorial days.

Memorial events can be enhanced with the reading of suitable poems and providing a period of reflection or prayer.

A number of poems and reflections are available on the Holocaust Memorial Day Trust website. These poems can be read as part of an HMD local inter faith activity.

These poems and examples of music can be found here.

The Archbishop of Canterbury Justin Welby, the Ephraim Mirvis, Chief Rabbi of the United Hebrew Congregations of the Commonwealth and Imam Qari Asim united to write a prayer for Holocaust Memorial Day 2020.

A number of prayers for different faith groups are available on the Remembering Srebrenica website.

These prayers can be found here.

A number of physical resources can be requested for free from the Holocaust Memorial Day Trust website, including booklets, posters and pin badges. These can be ordered here.

The Holocaust Memorial Day Trust has produced a ‘get involved’ guide for faith and inter faith groups to explore ways to commemorate HMD.

Ideas from this resource include:

The full guide can be downloaded here.

Each year Council for Christians and Jews (CCJ) produces a resource for churches in collaboration with the Holocaust Memorial Day Trust (HMDT). It includes a suggested liturgy for an act of commemoration within Christian worship.

The resouce can be adapted as necessary to your own context and can be found here.

Beyond annual days and weeks

The Holocaust Educational Trust and Remembering Srebrenica run year-round educational programmes that your local inter faith group can get involved in.

Since 1999 the Holocaust Educational Trust has facilitated visits for students and teachers to visit the former Nazi concentration and death camp of Auschwitz-Birkenau through its Lessons from Auschwitz programme. These visits are preceded and followed by half-day seminars.

In 2017 the first Northern Ireland interfaith delegation – including the Chair of Northern Ireland Interfaith Forum - travelled to Bosnia as part of Remembering Srebrenica’s Lessons from Srebrenica programme. This programme seeks to inspire people to take action in their UK communities that will help to create a better, safer and stronger society.